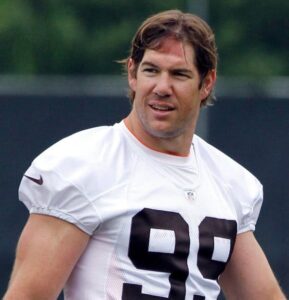 Hi all! My name is Scott Fujita. I’m Advisor of Langleyrams.com from 1/1/2020. I’m a former American football linebacker in the National Football League (NFL), and current Head of School at All Saints’ Day School.

Scott Fujita is a writer for Langley Rams covering Football which he lives and works. Scott joined forces with the New York Times, Fox Sports, foxsports.com and WDSU’s “Saints on 6” Primetime on the broadcast and sports writing circuit.

In 2003, Scott Fujita started all 16 games and led the team with 151 tackles (fifth-most in club history), while also registering 4 sacks, 6 passes defended, one forced fumble, and one interception. Scott Fujita had 15 tackles against the Houston Texans.

In 2004, Scott Fujita posted 112 tackles, 4.5 sacks, and 3 passes defended. His devastating hit against LaDainian Tomlinson is remembered as a turning point in the game when Fujita also recovered the ball before it went out of bounds.

In 2005, after the Chiefs selected linebacker Derrick Johnson with its first-round pick and also signed linebacker Kendrell Bell, Fujita asked to be traded. On September 3, Scott Fujita was sent to the Dallas Cowboys in exchange for a 2006 sixth-round selection (#186-Tre’ Stallings) and a 2007 conditional selection (not exercised). In three seasons, Scott Fujita registered 326 tackles and 9 1/2 sacks.

In the 2005 season, Scott Fujita played in 16 games and became the strongside linebacker starter for the last 8 contests, after Al Singleton was placed on the injured reserve list. Scott Fujita recorded 58 tackles, 2 sacks, one pass defense, 2 forced fumbles, and 9 special teams tackles. Scott Fujita was declared a free agent at the end of the season.

On March 13, 2006, Scott Fujita signed with the New Orleans Saints, reuniting with former Dallas Cowboys offensive coordinator, now head coach Sean Payton. Scott Fujita was the first free agent to join the Saints when they returned to New Orleans after their year-long absence in the aftermath of Hurricane Katrina.

Fujita was named defensive captain of the 2007 Saints. In Week 1 of the 2008 season, Fujita caught a crucial game-winning interception in the very end against the Tampa Bay Buccaneers. In the 2009 season, Scott Fujita earned a Super Bowl ring as a member of the Saints team that won Super Bowl XLIV on February 7, 2010, defeating the Indianapolis Colts 31-17 to win the team’s first league championship.