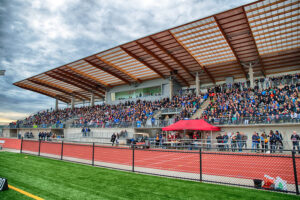 McLeod Athletic Park is truly a multi-sport facility with the ability to host several different sporting events. The stadium was fitted with brand new state of the art field turf in 2013, and a Jumbotron digital replay screen in 2014.

The McLeod Stadium is considered one of the top amateur sports facilities in Canada and was showcased in both 2012 and 2014 when the Langley Rams hosted and played in the CJFL Canadian Bowl National Championship Game. The stadium has the ability to hold 2,200 spectators but it is estimated that over 2,500 people attended each of the National Championship games.

The “Rams Room” private clubhouse is located within the stadium; it has personal space for each Rams player as well as meeting space, a coach’s room and an equipment room. Next to the “Rams Room” are two additional change rooms with showers.

McLeod Stadium has become home of the BC High School Championships and BC Community Championships, which are held there each year.

There is an eight-lane rubberized track, javelin, high jump, long jump, discus, shot put and pole vault. The track is among the best in BC and was utilized in 2010 for the BC Summer Games.

There are also six natural-turf soccer fields and one lit artificial turf field for soccer or football, four tennis courts and a lacrosse box. 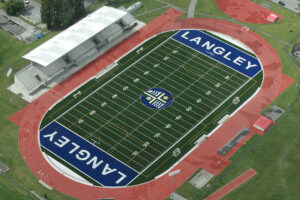