One of the most challenging things for a novice is the football positions on the field, especially offensive and defensive positions. It is hardly accessible with so many players on the pitch; all dressed identically.

Offense and defense are the most important positions in football. Players’ duties and responsibilities are determined by their position on the football team within each of these groups.

Today, Langley Rams will provide you with detailed information about these NFL positions. Let’s read on!

What Are The Positions In Football? 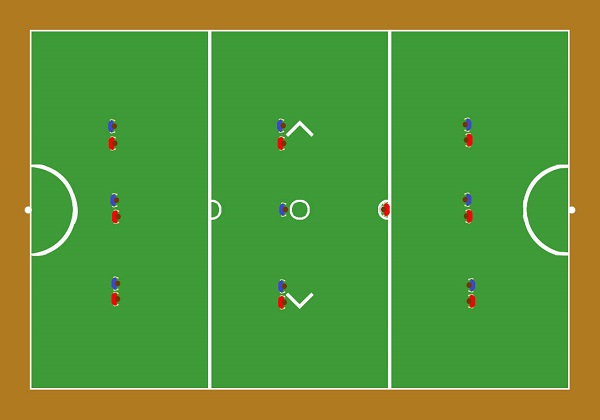 According to the rules, a football team can only have 11 players on the pitch at any given moment. Players are assigned to certain positions or responsibilities by their teams. The squad comprises two main units: offense, defense.

View more: How many players on a college football team

The three main components of a football defensive team are the defensive line, linebackers, and secondary—or defensive backline.

The Defense Coordinator is in charge of the collegiate and professional football unit. The Defensive Coordinator is responsible for the strategy of the defensive team and execution and in-game decisions and play-calling, alongside the Head Coach.

The Defensive Coordinator’s and his players’ goal is to halt the opposition team’s offense by handing the ball back to them. It can be done by tackling them short of the line for a gain or by getting the ball away.

It can be accomplished by interception or fumble recovery. Finally, the defense prevents the other football team from moving the ball down the field and scoring a touchdown or shooting a field goal. 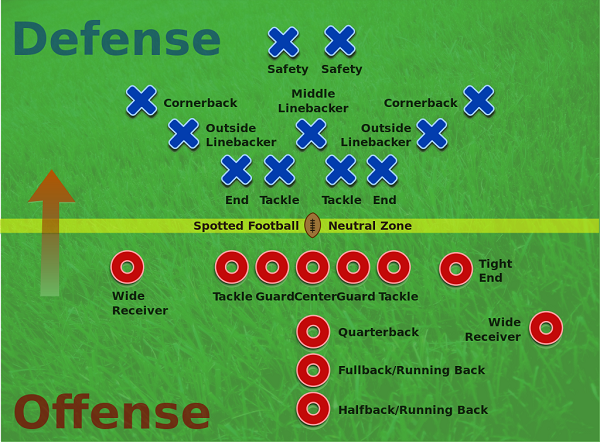 The defensive line refers to the group of defenders on defense that line up closest to the line of scrimmage. Based on the defensive strategy, three or four defensive linemen line up across from the offensive line, hands on the field.

Before the ball is snapped, each of the defensive linemen takes a three or four-point stance. They usually rest one or both of their hands on the grass. As part of an overall defensive plan, the Defensive Coordinator determines the defensive set.

Here are the definitions for each of the defensive positions in soccer.

View more: How long is a football game

They are responsible for rushing the passer, sacking him below the line of scrimmage, and tackling ball carrier as they go upfield. The position demands strength and speed to weave through blocks and make tackles.

The guy positioned immediately in front of the center in a 3-4 defense is a nose guard or nose tackle. The tackles are positioned on each side of the offensive center in the 3-4 defensive formation.

The defensive end and tackle positions employ their height and leaping abilities to swat down passed balls thrown by the quarterback.

Their role is to stop offensive players from moving the ball downfield, pressure the passer, cover receivers, and force turnovers.

View more: How long is a football field in feet

The middle linebacker, often known as the “mike linebacker,” is an inside linebacker who lines up on the inside or center of the field.

The outside linebacker generally plays to one side of the defensive set or the other. Depending on the improper use of tight ends, they are referred to as strong-side or weak-side linebackers.

When a tight end is employed on offense, the tight-end side of the field is defended by a strongside linebacker, sometimes known as a “sam linebacker.”

The weakside linebacker lines up on the side of the field where there is no tight end. Blitzing the quarterback and covering receivers out of the backfield are responsibilities. 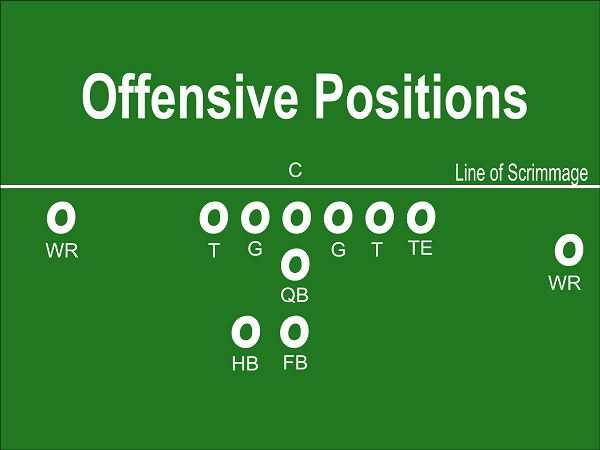 The offensive line, offensive backfield (including the running backs and quarterback), wide receivers, and tight ends make up a football team’s offensive unit.

Together with the Head Coach, the Offensive Coordinator establishes the offensive plan and calls plays for the offense.

When a team’s offense takes the field, they aim to advance the ball downfield to kick a field goal or score a touchdown.

A runner can bring the ball, or a quarterback can throw the ball to a receiver to gain yards. The following are the critical positions on a soccer offense:

The quarterback is the offensive team’s “general” – and most essential player. In the huddle, he conveys the play call to his teammates and is in charge of distributing the ball or, in certain situations, running the ball himself.

The quarterback stands exactly behind the center to receive the thrown ball. Alternatively, he can take a shotgun position and stand many yards out from the center.

When the ball is snapped, the quarterback has the option of passing, running, or handing off the ball. He can call an audible when the quarterback reaches the line and sees a defense that doesn’t fit the designed play well.

He may check out the play by employing hand signals or verbally calling out and informing his teammates of running the new play.

The running backs are positioned behind the quarterback. They are in charge of receiving a handoff and gaining yards by rushing upfield. Catching passed balls and blocking to defend the quarterback are two other roles.

Running backs come in a variety of shapes and sizes. A tailback (sometimes known as a halfback) is a lighter, faster running back. A fullback is bigger and stronger than a running back.

He does more leading blocking for the halfback, and he does more blitz support for the quarterback. The defense is forced to cover more of the football field with the proper play calls and faster running backs.

The width of a football field is 53 1/3 yards. It can exhaust defensive players, making even simple moves more challenging.

Wide receivers are the football team’s pass-catching professionals. They run routes downfield in the hopes of receiving the ball. They can also serve as a punt returner or a kick returner.

A split end is a wide receiver who lines up on the line of scrimmage (but to the sideline). A flanker is a receiver who sets up off the line.

If a specialist receiver is utilized between the wide receiver and the offensive line, he is a slot receiver. Shorter patterns and inside routes over the field center are typical slot receivers. 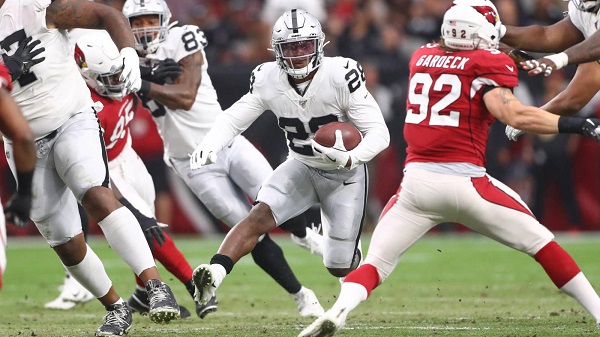 The tight end, like the tackle, is a pass-catching role on the offensive line. They are often huge, strong athletes who can play offensive line but have gentle hands to grab the ball.

Tight ends may either stay at home and block for running and passing plays or run routes like receivers.

One or two tight ends may be deployed at any time, based on the offensive set.

Five key players make up the offensive line: two guards, two tackles, and the center. Their goal is to shield the quarterback from pressing defensive players, block running backs, and provide enough time for the quarterback to complete a successful forward pass.

Before the ball is snapped, the offensive line would line up behind the line of scrimmage and take a set position. An offsides penalty can be given if a player shifts even a fraction after fixing his work.

Unless the ball is mishandled or deflected in the air, offensive linemen cannot tackle it after it is snapped.

The game starts with the quarterback snapping the ball from the center. Between the two guards in the offensive line, the center is positioned.

On each play, the center’s two primary responsibilities are to snap the ball to the quarterback correctly and to block.

The center’s responsibilities include calling out blocking assignments to the entire offensive line, snapping the ball, and blocking defenders.

The primary responsibility of the offensive guards is to stop the play that is called in the huddle. A pulling guard will occasionally leave his NFL position to take the lead in blocking for a move.

The tackle position is located on each end of the line of scrimmage. Like their offensive line colleagues, they are responsible for blocking, running, and passing plays.

However, they have the difficult task of defending against outside rushers (typically superior athletes) pursuing the quarterback.

In the NFL and college football, the ability to defend a quarterback’s blind side is highly regarded.

The offensive lineman who plays left tackle is generally the team’s greatest physically talented and skillful player. Because of the quarterback’s blind spot, the left tackle’s involvement in pass blocking is crucial.

You may better understand the game by studying these football positions on the field. It encompasses the methods and tactics used by teams to acquire a competitive edge.