The oldest MLB Stadiums may be found across the United States, but the oldest baseball stadium still in use is in Boston, Massachusetts, home to the Boston Red Sox.

Fenway Park is the oldest ballpark in Major League Baseball and it was built in 1912. Fenway sits 37,731 and its record capacity was 47,627.

What is the oldest baseball stadium? It’s without doubt the Fenway Park, which is the oldest MLB stadium still in use. Let’s see which stadiums appear in this list! 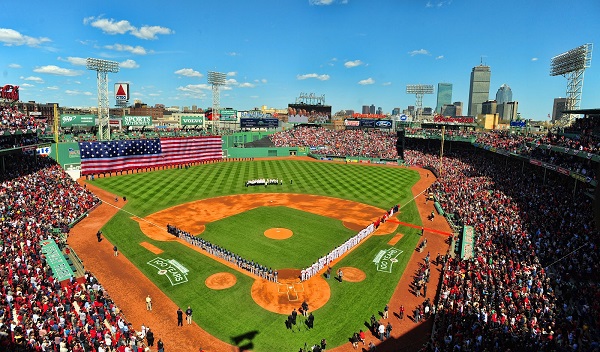 Since 1912, Fenway Park has been the home of the Boston Red Sox, making it the oldest Major League Baseball park. On April 20, 1912, the Red Sox met the New York Highlanders (later became the Yankees) in their inaugural game in the stadium, which the Red Sox won.

Fenway is one of the League’s smaller venues, just eight that can’t hold more than 40,000 fans. The stadium has been restored and enlarged throughout the years, giving it distinctive features like the Green Monster and Pesky’s Pole.

On the other hand, Fenway Park has retained its old feel and appearance, including its manually controlled scoreboard.

View more: How many innings in baseball 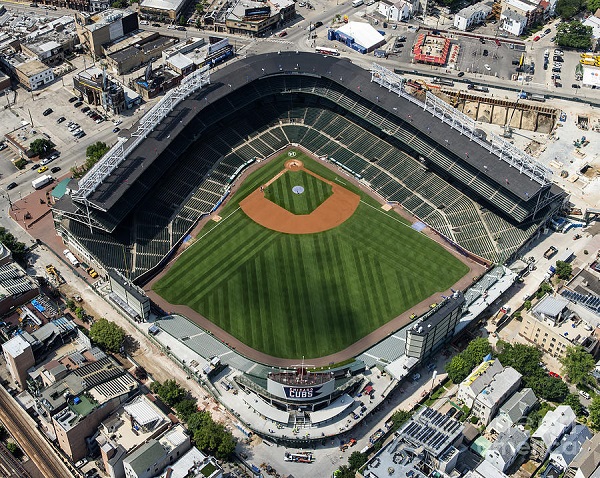 Wrigley Field initially opened in 1914 as Weeghman Park for the Federal League’s Chicago Whales, owned by Charles Weeghman. It was the oldest ballpark in America to include permanent concession stalls.

The Chicago Whales played at the venue for two years until the Federal League folded. For the 1916 season, Weeghman purchased the Chicago Cubs and relocated them to his baseball stadium.

Weeghman renamed the stadium Cubs Park a few years later. In 1921, he sold the franchise to William Wrigley Jr. of the Wrigley chewing gum business. 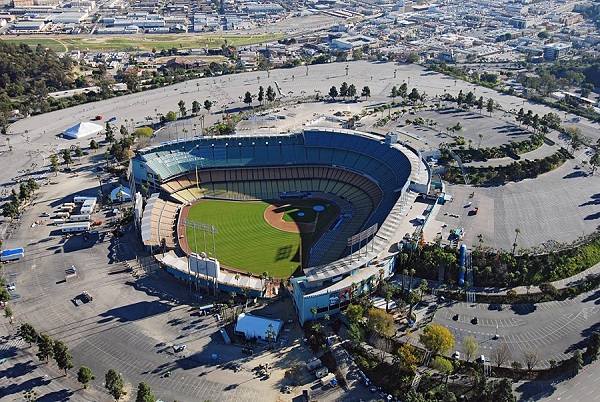 Dodger Stadium is the third-oldest MLB stadium in the country and the oldest west of the Mississippi. With a seating capacity of 50000, it is the League’s largest stadium by seat capacity.

The Los Angeles Dodgers, who are initially from Brooklyn, play in the ballpark. In 1950, Walter O’Malley bought the team and planned to construct a new stadium in New York, but officials stopped him.

After the 1957 season, O’Malley relocated the franchise to Los Angeles, and work on Dodger Stadium began in 1959. Dodger Stadium is one a great American ball park, with a new coat of paint applied every year and a complete arborist to maintain the landscaping. 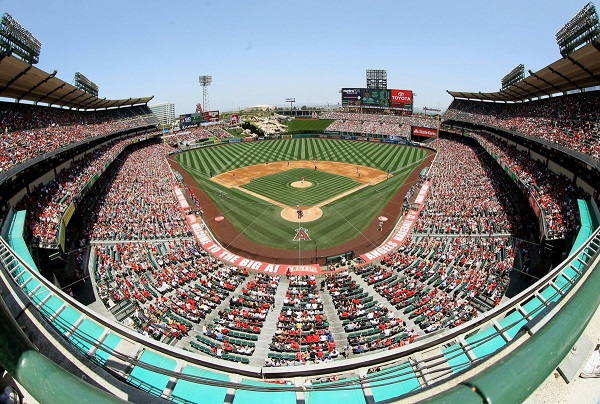 The Los Angeles Angels have called Angel Stadium in Anaheim their home since it was opened in 1966 as Anaheim Stadium. The A-frame scoreboard, decorated with a halo which used to be positioned behind the outfield wall, gained the stadium the moniker “Big A”.

The A-frame scoreboard was removed from the stadium and replaced with a modern display about 1980. The stadium was extended around the same time, adding roughly 23,000 seats, increasing the total number of seats to 65158.

From 1980 through 1994, Angel Stadium served as the home of the Los Angeles Rams of the National Football League (NFL). The stadium was renovated for the 1996 and 1997 seasons following the Northridge earthquake in 1994.

The stadium was called Edison International Field until 2003, when it returned to a baseball-only facility, and the team was renamed the Anaheim Angels. In 2005, the group renamed itself the Los Angeles Angels, and the field was renamed Angel Stadium in Anaheim. 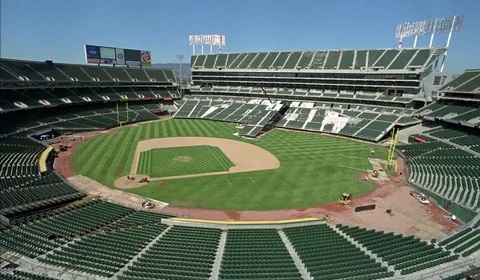 The Oakland Coliseum is a multi-purpose ballpark home to the Oakland Athletics of Major League Baseball and the Oakland Raiders of the National Football League.

Municipal authorities initially advocated building a stadium in Oakland in the 1940s to attract a professional football and baseball club to the region.

The Oakland Raiders played their inaugural game at the Coliseum on September 18, 1966, after construction began in 1962 and was finished in 1966. After the 1967 season, Kansas City A’s owner Charlie Finley opted to relocate his franchise to Oakland.

On April 17, 1968, the team was christened the Oakland A’s, and they played their inaugural game at the coliseum. The Raiders moved out of the stadium to Los Angeles in 1991 but returned in 1995. The club will be departing again in 2020, as the Raiders aim to relocate to Las Vegas.

The ideas for Kauffman Stadium were initially presented in 1967, when the city was seeking a method to prevent Charles Finley, the owner of the Kansas City Athletics, from transferring the club elsewhere.

During baseball’s winter meetings in 1967, the league planned to add four new clubs that would start play in 1971, but U.S. Senator Stuart Symington pressed the league to allow new clubs to begin to play in 1969, and Kansas City was given a new team called the Royals.

The ballpark was initially known as Royals Stadium, and the Kansas City Royals first played there on April 10, 1973. The stadium was the first to employ astroturf as a playing area in the American League. The stadium was called Ewing Kauffman Stadium in 1993 when the astroturf was replaced with genuine grass. 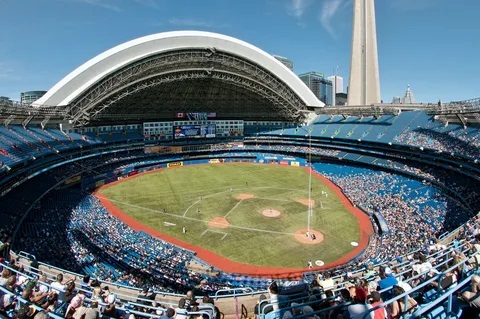 The Rogers Centre is a multi-purpose facility that has hosted numerous sports teams and the Toronto Blue Jays, the only Canadian club in Major League Baseball.

In the early 1970s, Toronto attempted to entice a big baseball club to relocate to the city by persuading the San Francisco Giants. After failing to get the Giants, Toronto petitioned the MLB to add a club to the city, which they did in 1976.

The Toronto Blue Jays played in Exhibition Stadium until a new stadium was built, converted to one of the oldest baseball stadiums. The ballpark opened in 1989, and it was known as the SkyDome since it was the first stadium with a retractable roof.

For 15 years, the stadium was known as the SkyDome, and it has gone by various other titles since then. After Rogers Communications purchased this oldest baseball stadium for $25 million in 2005, the Rogers Center was christened. 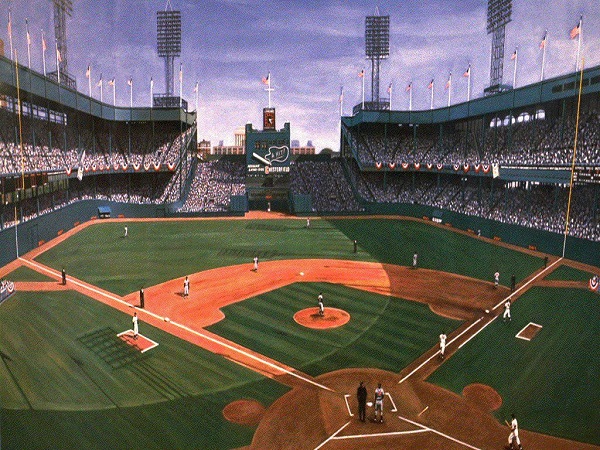 The original location of this storied New York stadium was at a Central Park corner. Polo Grounds got its name from the fact that people used to play polo in the area.

Even after a new Polo Grounds was further uptown, the moniker stayed in Coogan’s Hollow. When the new baseball stadium debuted, it had about 16000 people, but by the 1950s, it had grown to approximately 55000.

The New York Giants played there until 1958 when they relocated to San Francisco. In 1913, the Yankees relocated to the Polo Grounds.

That arrangement worked well until the Yankees bought Babe Ruth from the Boston Red Sox in 1920. Ruth’s popularity irritated the Giants because of the short right field ideal for his left-handed batting.

The Yankees attracted 1290422 fans to the Polo Grounds in 1920, more than 300000 more than the Giants. The Yankees relocated to Yankee Stadium after being pushed out by their in-city rivals in 1923. 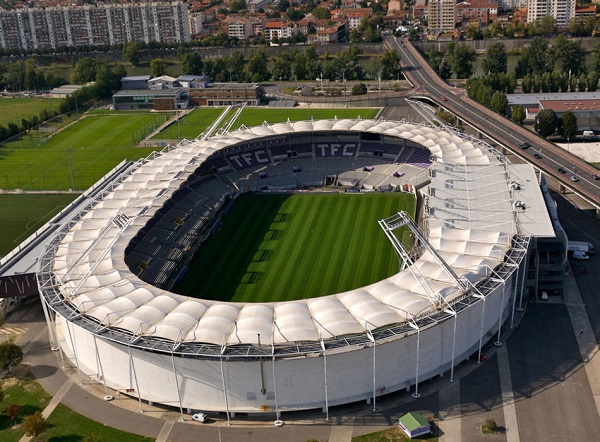 Until the baseball dimensions of the football-friendly stadium were altered, center field was 470 feet from center field, and the left and right field corners were 463 feet—distances that no home run batter would ever appreciate.

Bill Veeck built shallower fences than the initial walls and shifted them to the best depth for the team. MLB forbade that practice.

From 1934 until 1946, the Indians exclusively played holiday games and played the weekend in Municipal Stadium because of its 78000-seat capacity, making average baseball audiences appear insignificant.

Weekday games were held at League Park, a venue with its unique quirks. The park featured a short left field (290 feet) and was located in a rectangle formed by city streets.

The fence in left field was 40 feet high, three feet taller than Fenway Park’s “Green Monster,” to compensate for the lack of depth. 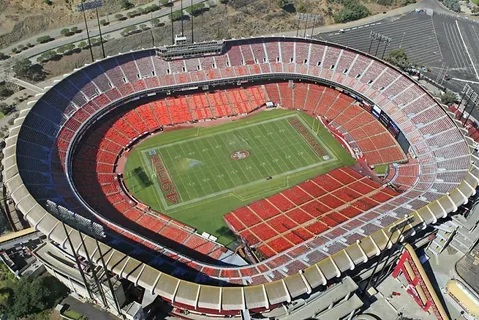 A blast of wind blew San Francisco Giants pitcher Stu Miller off the mound during the 1961 MLB All-Star Game. That was a major fault in the otherwise beautiful orange stadium between downtown San Francisco and the airport.

In the mid-1980s, there was talk of erecting a dome above the park, but the plan never materialized. The massive 6.9 Loma Prieta earthquake struck the ‘Stick in 1989, just before Game 3 of the Giants-Oakland A’s World Series. This event is then postponed and rescheduled ten days later.

We hope this list of the oldest baseball stadiums will satisfy you. If you have discovered any old baseball parks that are not included in our list. Let Langley Rams know about it!